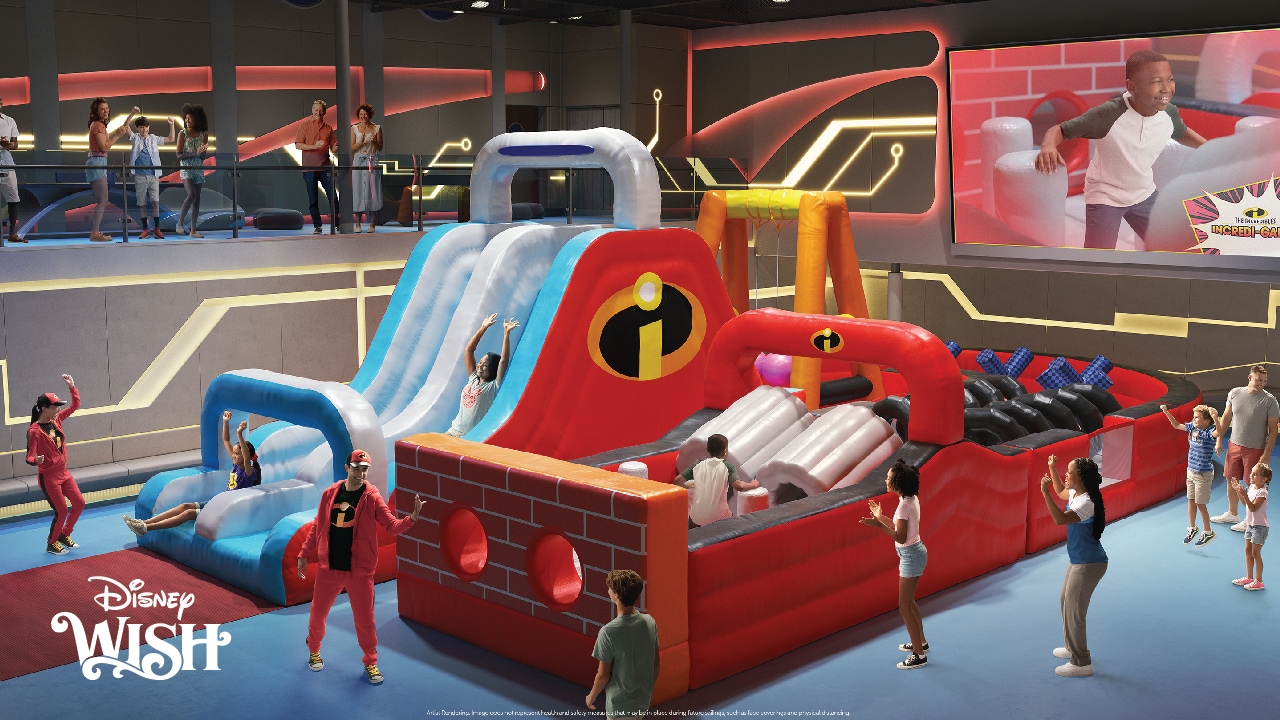 Today Disney announced that a new family competition is coming to the Disney Wish-themed to the Incredibles. Introducing … the Incredi-Games! Inspired by the dynamic characters of Pixar’s “The Incredibles,” this highly interactive, imaginatively produced game show will dare families to take on an incredible obstacle course with over-the-top physical challenges themed to the powers of the Parr family heroes and their good friend Frozone – no capes required!

This game show-style experience will feature high-energy hosts, adrenaline-pumping music, special effects and more that will have our guests saying, “That was totally wicked!” (IYKYK) Which means it’ll be just as enjoyable and entertaining for those who choose to watch from the sidelines as those who are immersed in the action. (Hero Zone has plenty of balcony viewing space for spectators to admire the fearless feats of their fellow cruisers.)

But those aren’t the only heroics in store for this action-packed arena. Hero Zone will also be the new home of a guest-favorite Disney Cruise Line experience: Jack-Jack’s Incredible Diaper Dash! Now with more fanfare than ever before, this beloved competition will offer terrific tots the chance to compete for the coveted title of Diaper Dash Champion as they speed-crawl across a 20-foot track amid the cheers (and chuckles) of family, friends and adoring fans.

What’s more, when Hero Zone isn’t all decked out in super hero gear, it will be a free-play sports hub where guests can enjoy some friendly competition with basketball, soccer and a variety of table-top games, including Ping-Pong, air hockey, foosball and shuffleboard.

I don’t know about you, but I’m already practicing my super skills in anticipation of these epic new experiences aboard the Disney Wish. Who will you be teaming up with for the Incredi-Games, and which challenge are you sure to triumph? Let us know in the comments below!