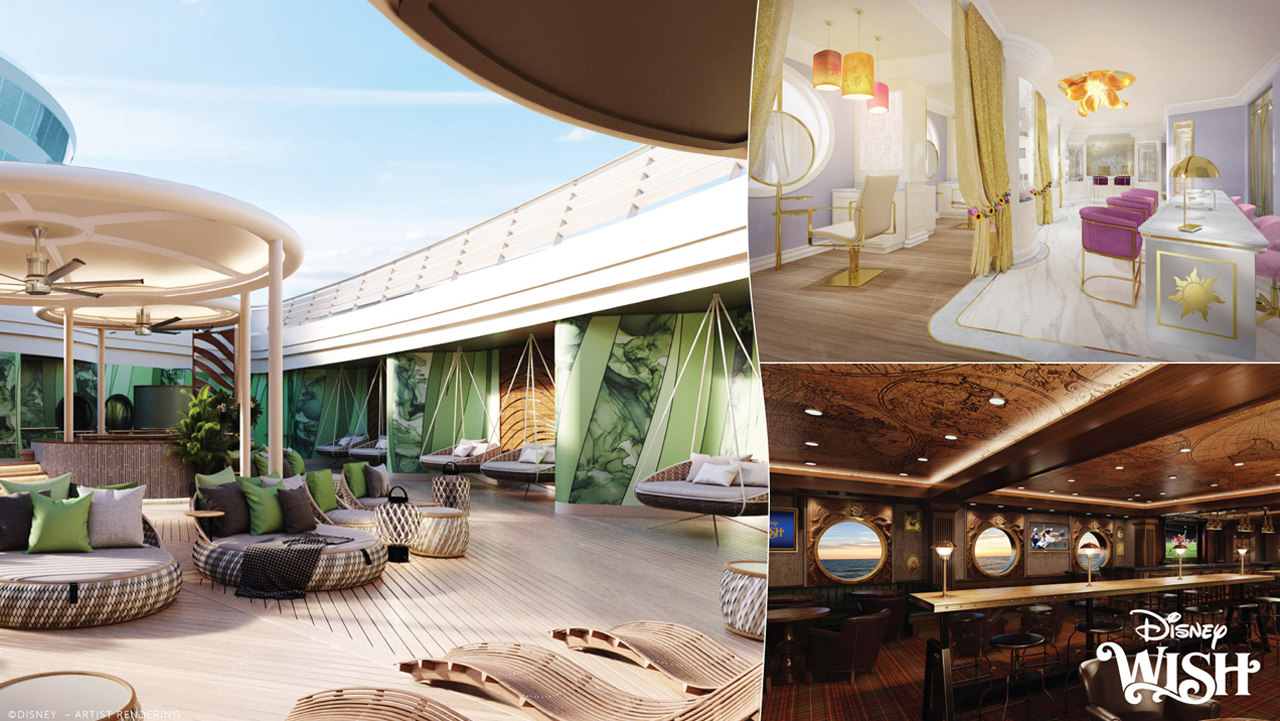 Today Disney Crusie Line announced that a brand new way for adults to pamper and play, sip and swim, escape and indulge aboard the Disney Wish,

Here are the highlights of today’s big reveal:

Check out this video that Disney Cruise Line released for a closer look at the enchantment in store for adults aboard our newest ship, then continue reading for more details about the experiences announced today.

For the first time aboard a Disney ship, Senses Spa will feature a dedicated outdoor relaxation space! This open-air oasis is a brand-new extension to our signature Rainforest experience, which has been reimagined for the Disney Wish to provide even more ways to relax and rejuvenate. The Rainforest will introduce the fleet’s first ice lounge, allowing guests to combine thermal therapies, which promotes both physical wellness and tranquility. It will also include guest-favorite elements like heated ergonomic loungers; sensory spa showers; and sauna, steam and dry chambers.

At Untangled Salon, you can let your hair down (and have it styled any way you want) in a light and airy environment that is perfect for pampering. Inspired by Rapunzel, this chic, high-end salon will be adorned in shades of purple and gold, decorated with floating lantern light fixtures and outfitted with custom cut-metal privacy screens depicting Rapunzel’s own paintings. One side of the space will even gleam and glow with the golden light of a signature chandelier that evokes the iconic flower that gave her hair its magical qualities! In addition to haircuts and styling, the menu of services at Untangled Salon will include manicures, pedicures, teeth whitening and skin treatments.

Hook’s Barbery will be a unique twist on a traditional European men’s salon, offering cuts, shaves, and nail and skin care. Decked out in dark woods, handsome leather chairs and ornate golden mirrors, the space will brim with narrative details inspired by its namesake, Captain Hook: an inlaid wooden map of Never Land, a hidden pocket watch and — of course — a hook, to name a few. A trio of seemingly nondescript lanterns will occasionally come to life with lighting and audio effects to signify Tinker Bell jumping from one fixture to another.

Not only will Hook’s Barbery provide salon and barber services, but it will also boast the ultimate toast to a pirate’s life: a hidden bar! This (not-so-secret) treasure trove of pre-Prohibition bourbons, vintage whisky and port, aged rum and premium spirits will be a liquor enthusiast’s paradise, ideal for low-key hangouts, romantic date nights, hosted tastings and special evening events.

Keg & Compass is a pub that celebrates the adventure and romance of the sea, designed in the rustic architectural style of a late 1800s Norwegian sailor’s map room and drawing inspiration from the rich folklore of Norse seafaring. Spanning the entire ceiling will be a grand, fantastical map in old maritime style that features, among other references to ocean lore, a homage to Disney characters and stories related to the sea. In addition to such characters as Ursula and Moana (appearing in the geographically accurate locations of their stories), the map will call out important locales related to The Walt Disney Company and, specifically, the design and construction of the Disney Wish.

This casual setting will be the perfect place to kick back and watch live sports, news and major broadcast events while sampling a specialized selection of beers, including three custom craft brews available exclusively aboard the Disney Wish, along with an assortment of liquors, wines and cocktails.

Nightingale’s is a refined piano bar inspired by Cinderella’s lyrical rendition of “Sing Sweet Nightingale” in the 1950 film, offering an extensive menu of fine wines, bubblies and hand-crafted cocktails. Classically modern with a soft metallic palette, the predominant design feature will be a glittering chandelier perched above the piano — a swirl of pearlescent bubbles and music notes displaying the titular song’s melody meticulously crafted out of shimmering rose gold. This vibrant lounge will be a thematic extension of the fairytale-inspired Grand Hall from which it stems, with large doors that allow the twinkling tunes to spill out across the atrium, inviting passersby to stop and stay for a while.

If you’re looking for a New Orleans-inspired good time aboard the Disney Wish, you’ll want to go down to The Bayou, an informal lounge themed to “The Princess and the Frog.” Flourishing with magnolia blossoms, lily pads and a canopy of twinkling fireflies overhead, this space will evoke the magical marsh where Tiana and Naveen take refuge in the film. This centrally located venue will offer creative cocktails, specialty coffees and signature beignets in a lively, social atmosphere complete with live entertainment and musical performances.